When I was just five years old, I remember hiding with my younger brother as quietly as we could on the top of our bunk bed, as my mother went room to room in the house calling for us. I don't remember what it was we thought we were going to be in trouble for, but we were convinced she thought we had done something terrible and believed that the top bunk was a perfect hiding spot. It turns out, however, that it was an awful hiding spot, and she wasn't looking all over for us because we had done something bad, it was because she had just made an amazing batch of chocolate chip cookies and wanted us to come have some! That was my first memory of chocolate chip cookies. 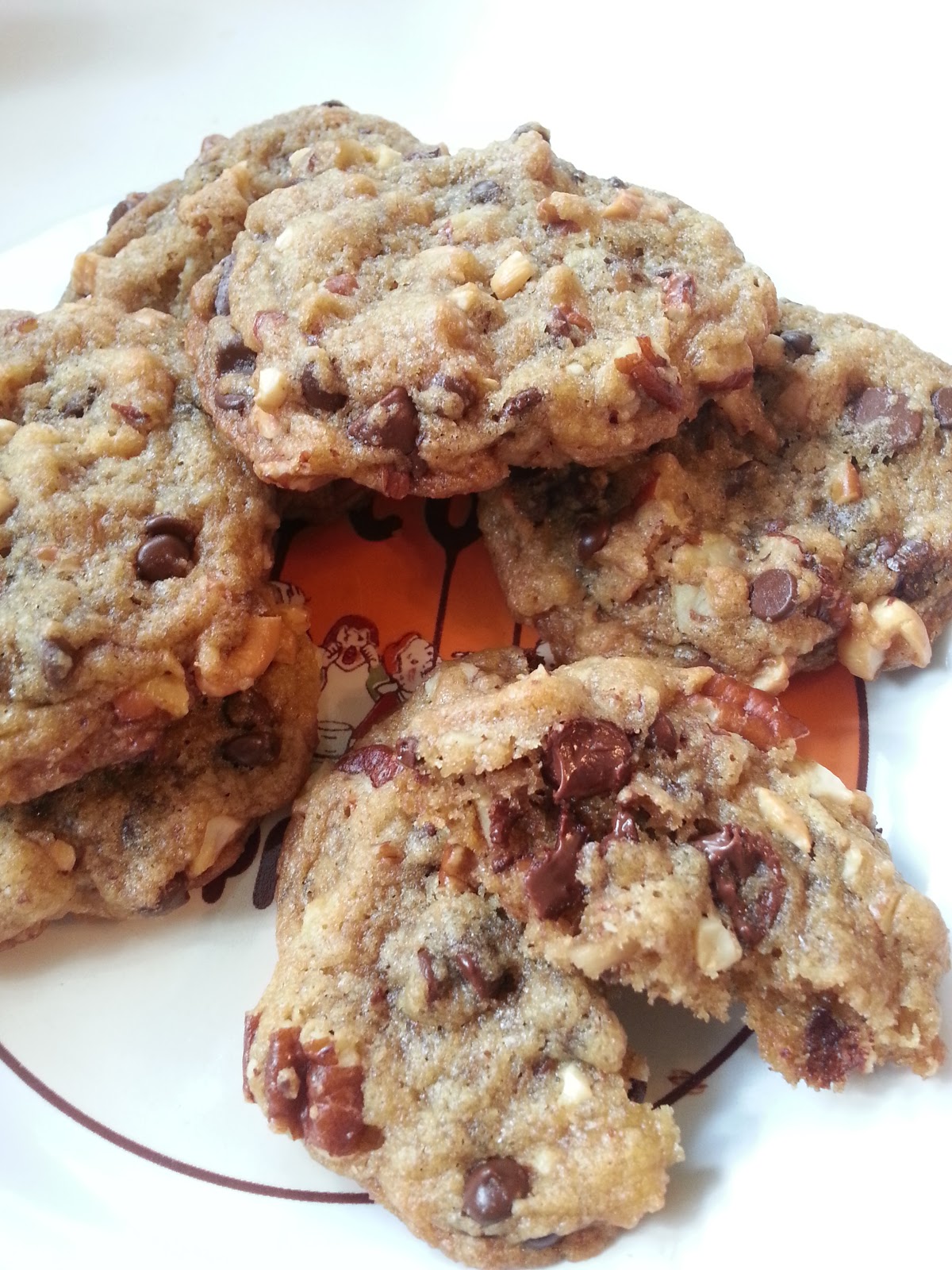 (with aquafaba, of course)

I can still remember the first time time I made my own batch of chocolate chip cookies on my own. I was just a wee sprat in my twenties, and had no idea what I was doing. All I knew was that I wanted that familiar taste from home, so I did what any good son would do and called my mum on the phone. I diligently wrote down her tried and true recipe and every bit of advice she had to give.  At the time, I wasn't aware at all of the difference between an awful cookie and a good cookie. Being young has its advantages. I just wanted that familiar pillowy, slightly crunchy, chocolaty goodness, and to be able to eat as many as I wanted, whenever I wanted!

Many years and many batches of that same basic recipe later, it dawned on me that you didn't actually have to follow the recipe. You could actually play with the ingredients. Change something here, tweak something there, and that was the start of a year long obsession I had with chocolate chip cookies. I bought books, looked up recipes, spent many nights adjusting and testing each part of the recipe until I got something I actually started to love, not just something satisfying. It was a precisely tuned recipe.. a subtle dance between the ingredients we can get locally, our kitchen stove's temperamental settings, and the delicate relationship between each of the ingredients. It was perfect!

But it had one problem ... it was based on butter. That's how many cookie recipes start -- cream butter and sugar together and go from there.  When our family started transitioning to a vegan diet, it was like starting over. Replacing the butter with earth balance sort of worked, but not really. It was oily, it tasted like rancid soy, and all-in-all, it was very disappointing. When we found soy free earth balance, I tried that. It got rid of the horrible soy taste, but to make the cookies work, I had to use flax or commercial starchy egg replacers, and that made everything taste weird. That perfect balance was lost, and I didn't have the energy to make it all work, so I stopped making chocolate chips cookies.

Fast forward to last month. What a month! With the advent of aquafaba, and a post by Somer McCowan over at vedgedout.com, my brain finally put the pieces together.  With the horrible soy taste gone, all I really needed to do was find a good replacer for the egg, and aquafaba is just that. Just three tablespoons of the liquid from a can of chickpeas per egg in a recipe has just the perfect amount of liquid, binder, emulsifier, and organoleptic characteristics one needs! So I had to try... 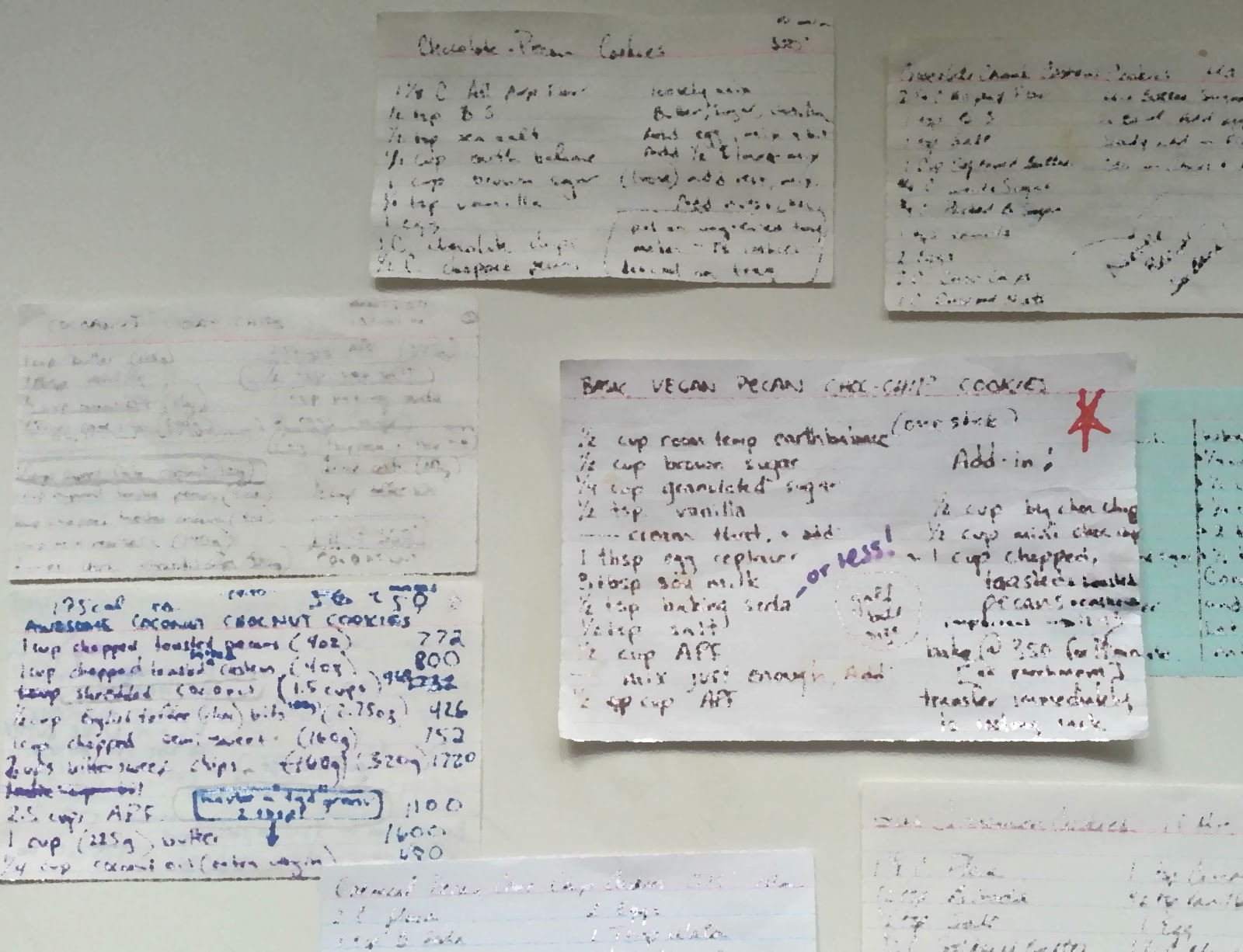 Before you start, you need to make sure your vegan butter is at room temperature. You can't melt it in a microwave, no matter how slowly you try. You really need to let it sit out, or you're facing an up-hill battle right out the gate. Take a stick out before you go to bed, so it's soft in the morning.

You'll also need to toast your nuts. I'll just copy & paste what I wrote before in the  BEST VEGAN FLOURLESS CHICKPEA CASHEW COOKIES about the nuts because it's really important for good chocolate chip cookies with nuts:

One of the parts of this recipe that makes it so good is the play of chocolate against pecans. To make that work well, you can't just buy toasted pecans and hope they'll work, and you can't use raw pecans. You have to toast your pecans to bring out their OooMPH.  I keep raw pecans ordered from online in the freezer, because nuts can go bad if left out for too long, and the last thing you want to ruin your perfect cookies are rancid oils. To toast some, I just take out a handful and spread them on a toaster oven tray. I set the timer for about 4-5 minutes. The thing about pecans is that they burn easily. You want them to go long enough that you can start to smell them and they hiss and crackle, but you don't want them to burn, and that's a fine line. But, it's a delicious fine line, and if you know how to find it, it'll give any dish you add it to just that much more POP.

So toast a handful of pecans and cashews together, and let them sit so they're cool by the time you chop them and add them to the recipe. Here's a glorious picture of the lightly toasted nuts: 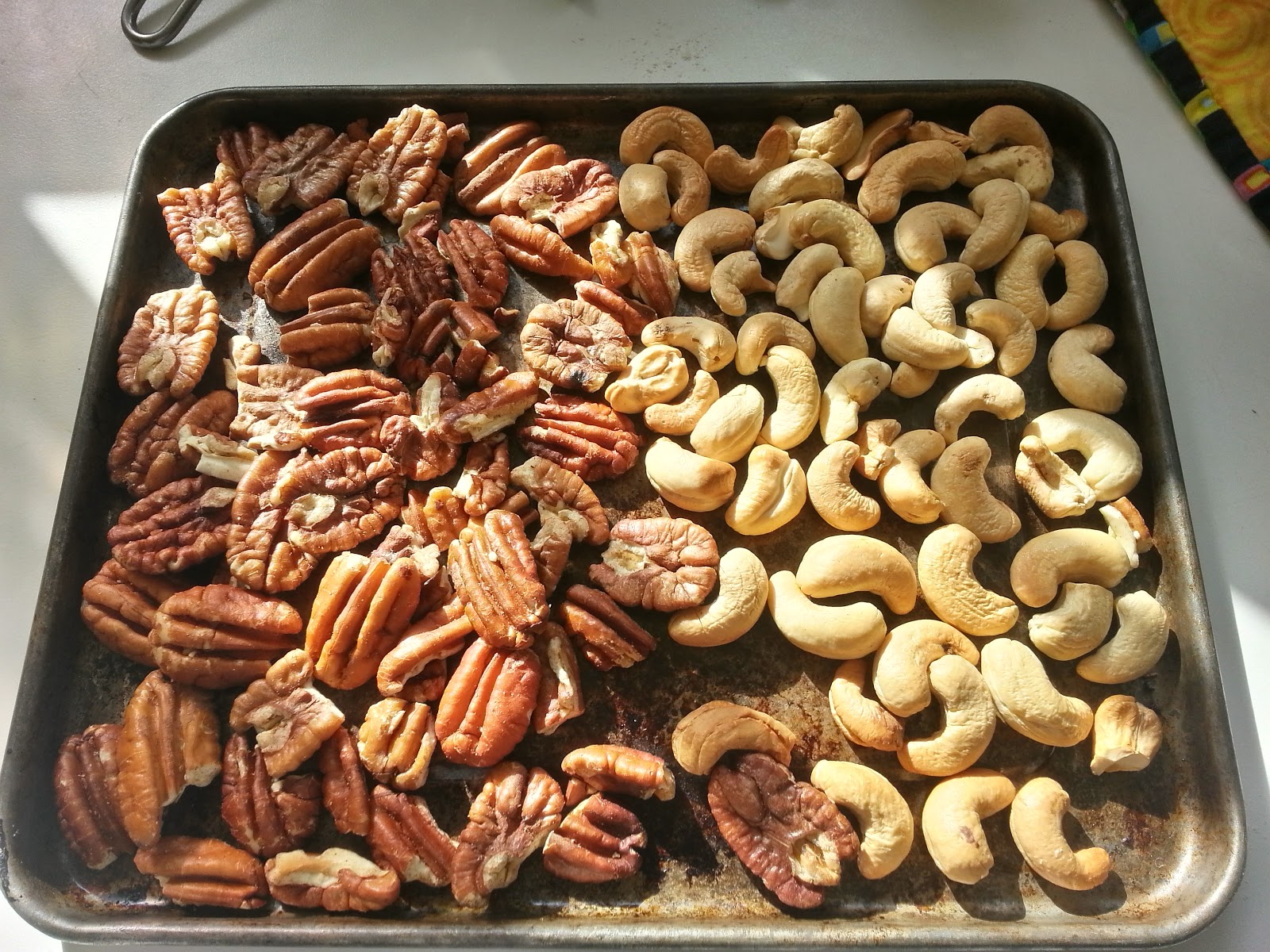 Step 1 - Cream your sugar, vanilla, and vegan butter together 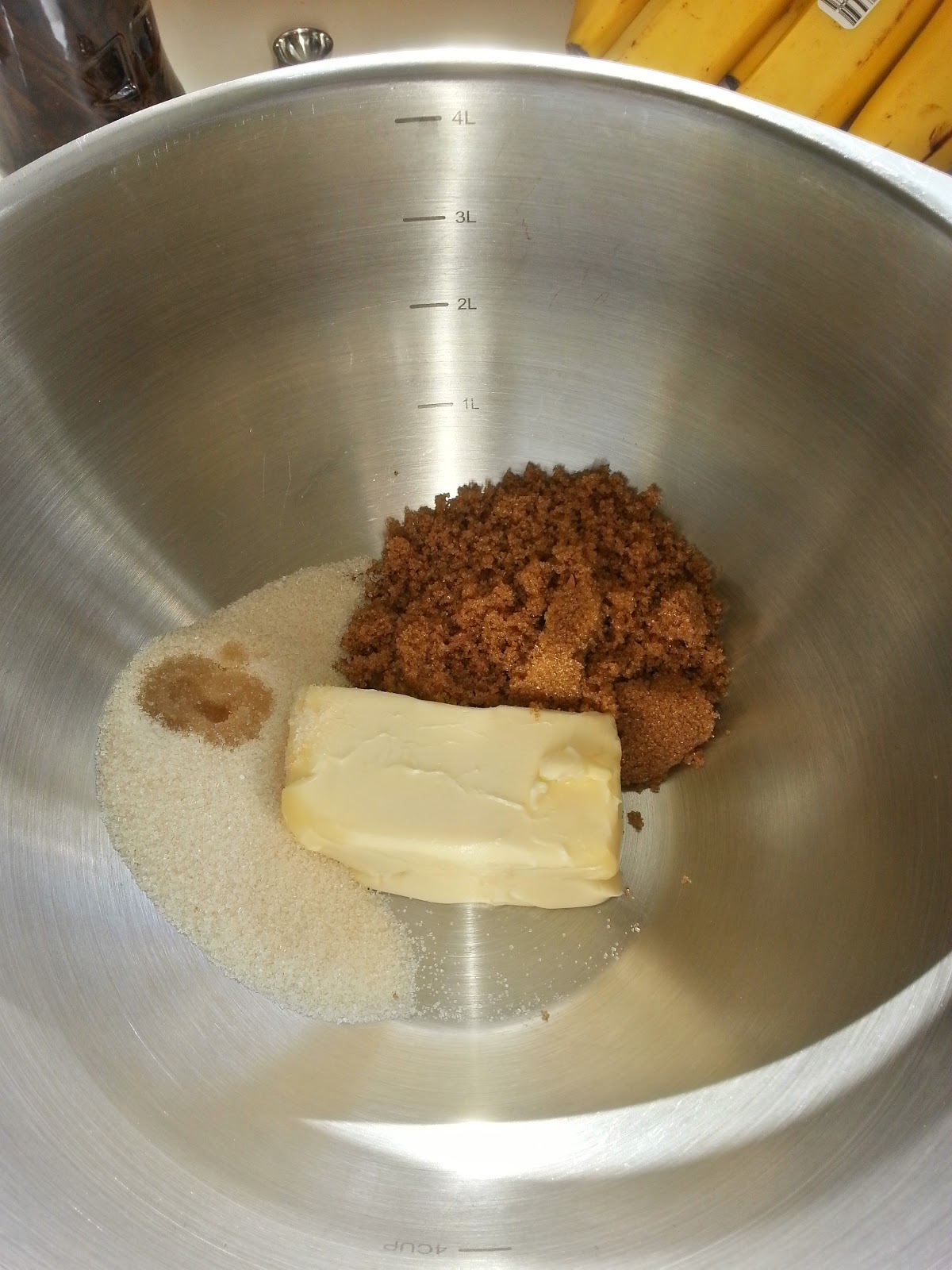 I like to use a large bowl, even for a small batch like this recipe, because I like to mix my batter by hand, and it gives me something to hold on to. Mixing by hand saturates the recipe with a loving energy.  There's something about a mixer that skips all that and makes the batter run together in a way that changes the whole texture of it. The same thing happens if you try to melt your butter first.

If you want these to turn out the way they're supposed to, you want to cream your butter, sugar, and vanilla together by hand. Since your butter is already soft, it's relatively quick. I like to go until just shy of fully incorporated, which takes about thirty seconds. You don't want to over-mix it, because it gives the cookies a bit of extra character, and it doesn't let the sugar fully dissolve, which is actually part of what makes these so yummy.  Here's what it looks like when I mixed it. You can still see ribbons of butter and heterogeneous shades of color in the batter...: After you drain your liquid, take three tablespoons of it and add it to your batter. 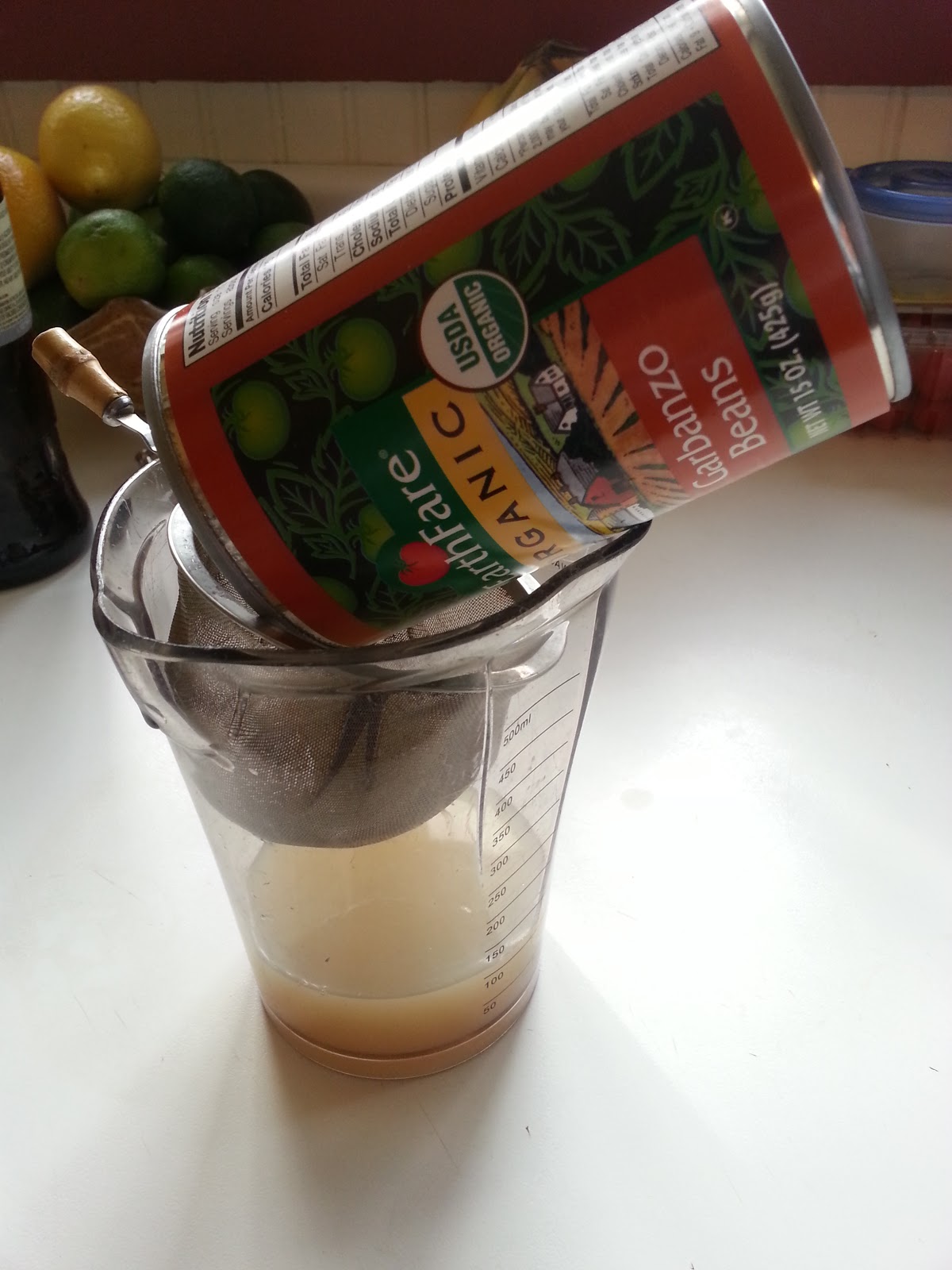 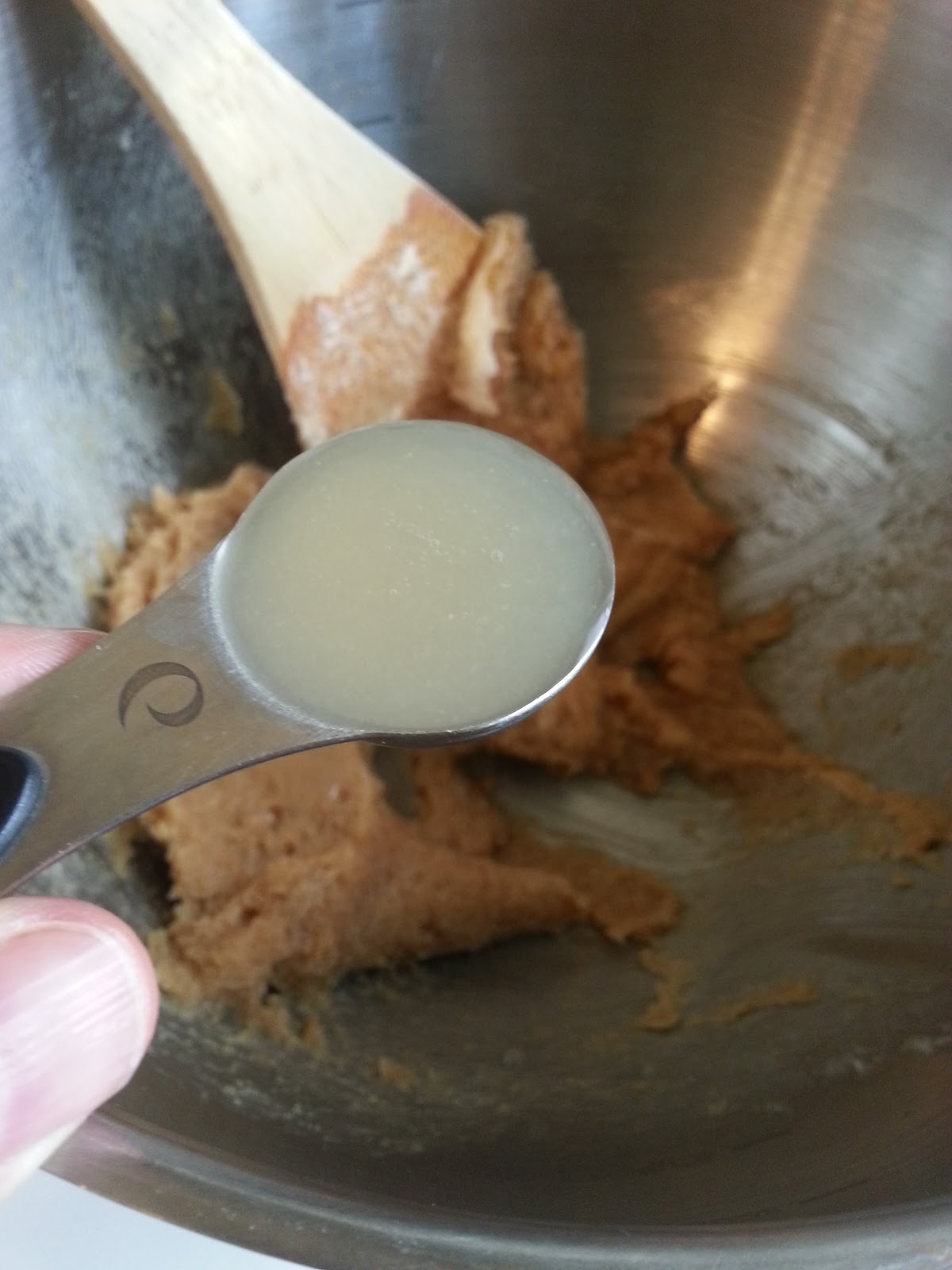 I don't usually sift my flour, baking soda, and salt together, but I do try to spread it around the bowl so one cookie doesn't get all the fun. It probably wouldn't hurt to sift it, I just never have.  I do find it easier, however, to add the flour in two parts. Here's the first half of the flour with all the salt and baking soda, just thrown into the batter: 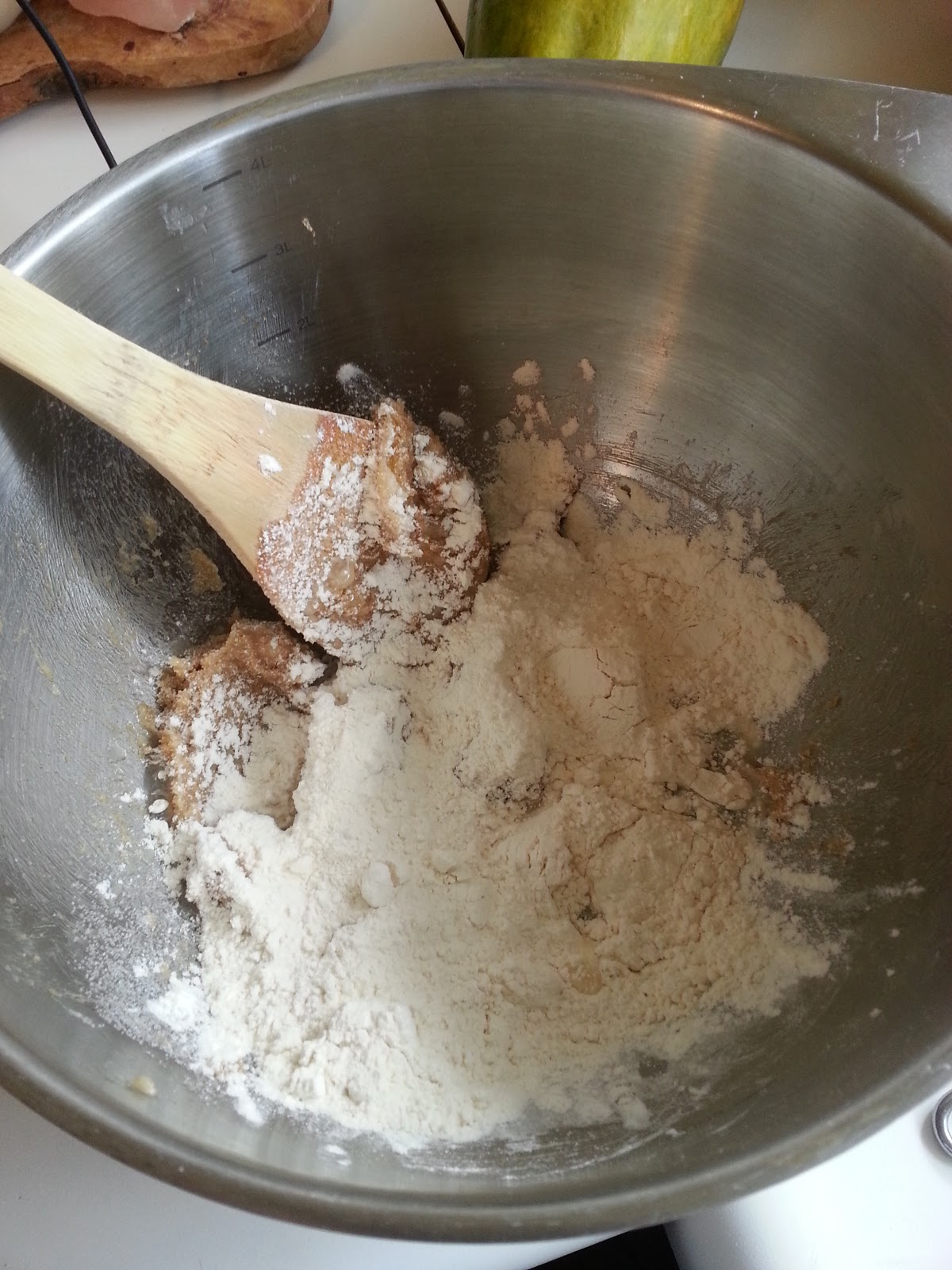 And mixed until just incorporated. Don't over mix, don't worry about the sides. Less is better here. 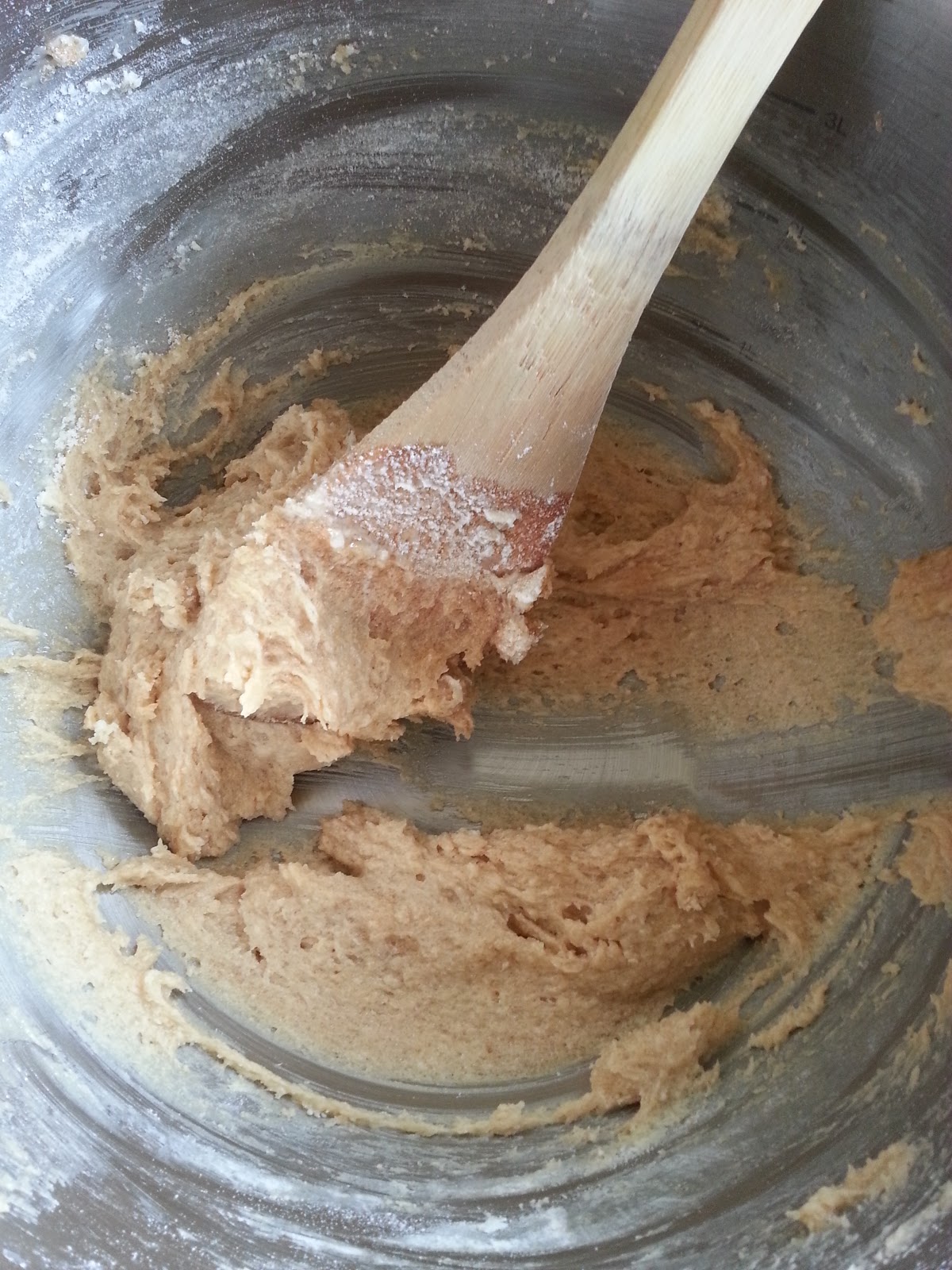 The remaining 1/2 cup of flour added, and mixed until just shy of fully incorporated: 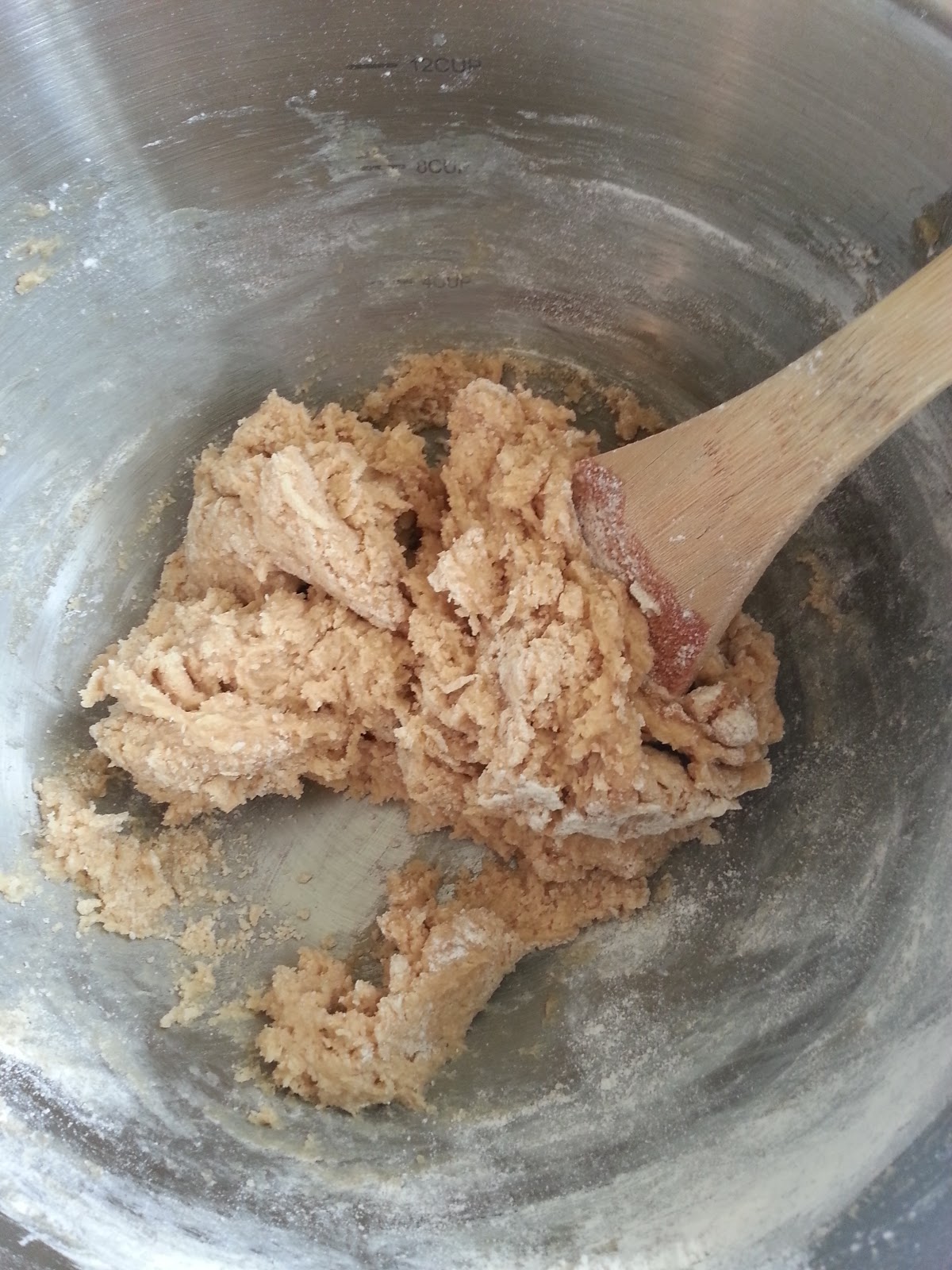 At this point the batter is relatively dry, has a lot of folded layers in it and is not overly mixed. Set it aside and gather your fixin's.

Step 4 - throw in the goodies.

Onto the batter, you want to toss 1/2 cup of your toasted pecans, 1/2 cup toasted cashews, 1/2 cup mini morsels, and 1/2 cup of chocolate chips. Realistically you could add any ratio of those things at this point, as long as you end up with about 2 cups of goodies.  You could throw in few tablespoons of chopped vegan toffee, for instance. Have fun. This basic recipe is perfect for me, as-is, though: 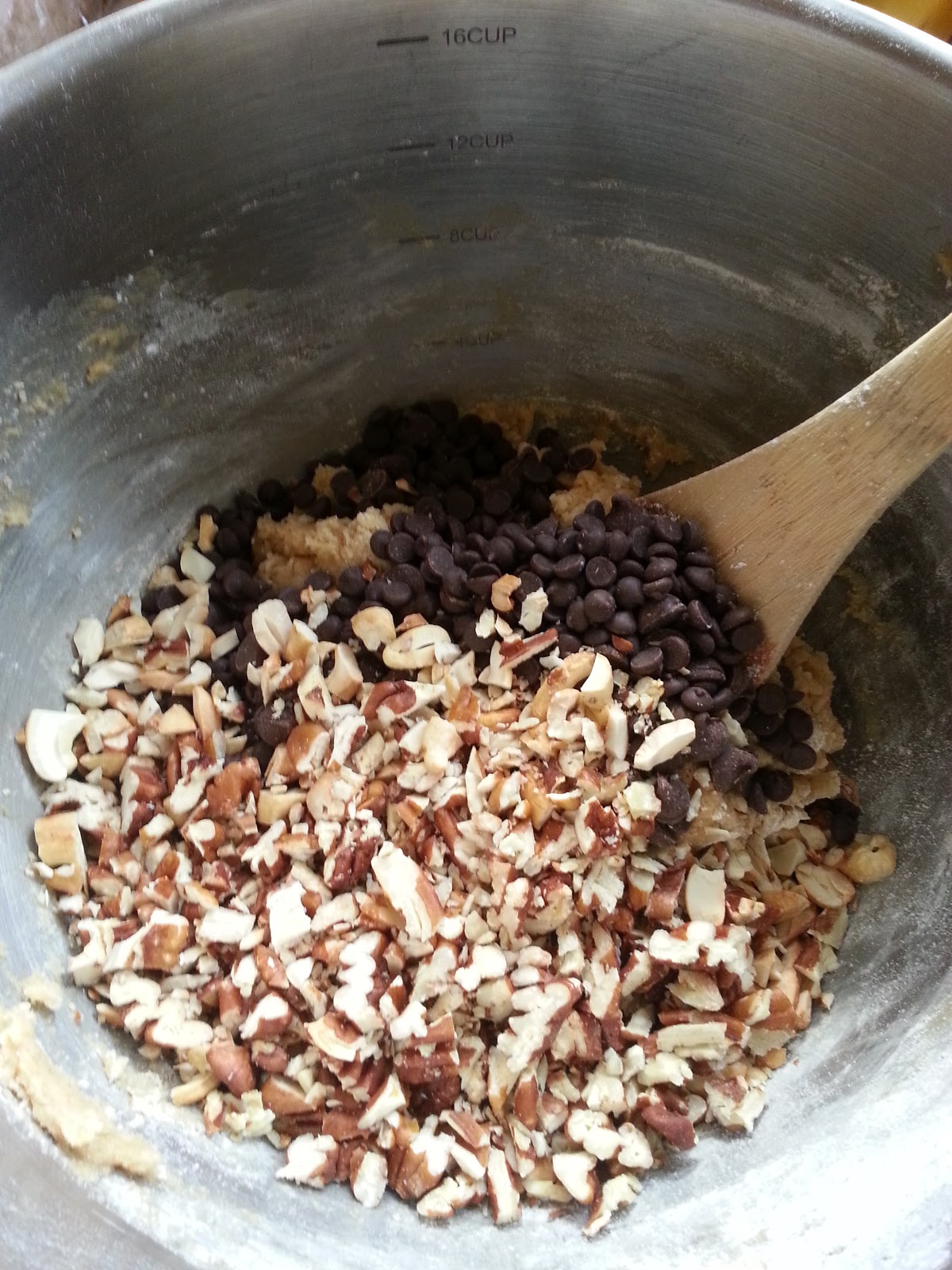 After everything is tossed in, just mix it all up. You want to mix it until it appears mostly uniform. Don't over mix it, but you want the nuts and chocolate chips pretty evenly distributed.  At this point you may need to restrain yourself, because the batter is so amazingly good. I never can. 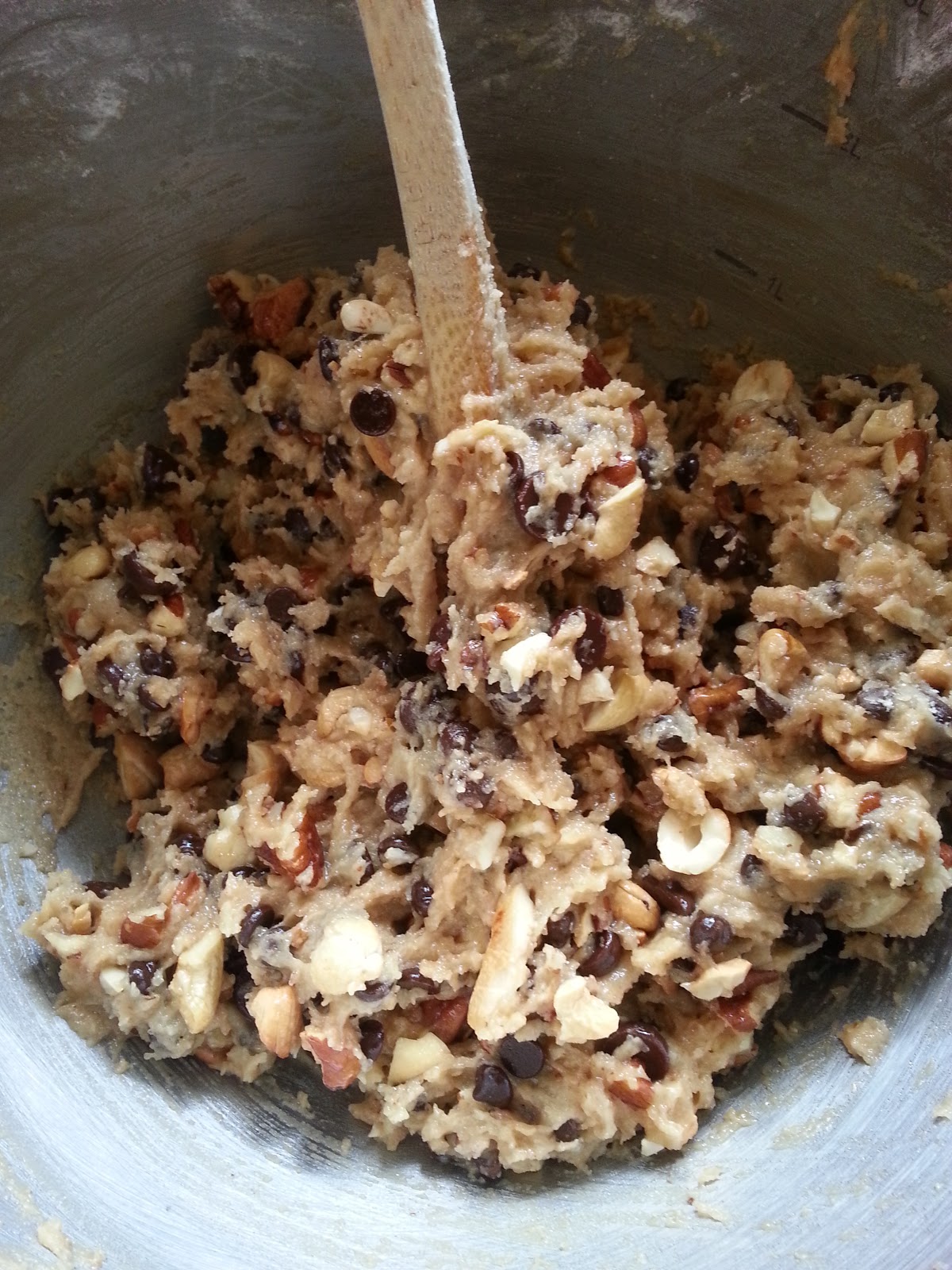 Dollop the batter in spikey balls about the size of golf balls or a tad larger. The size and cooking time go hand in hand. Smaller cookies take a little less time, larger ones take a bit longer. The sweet spot seems to be a dollop about yea big: 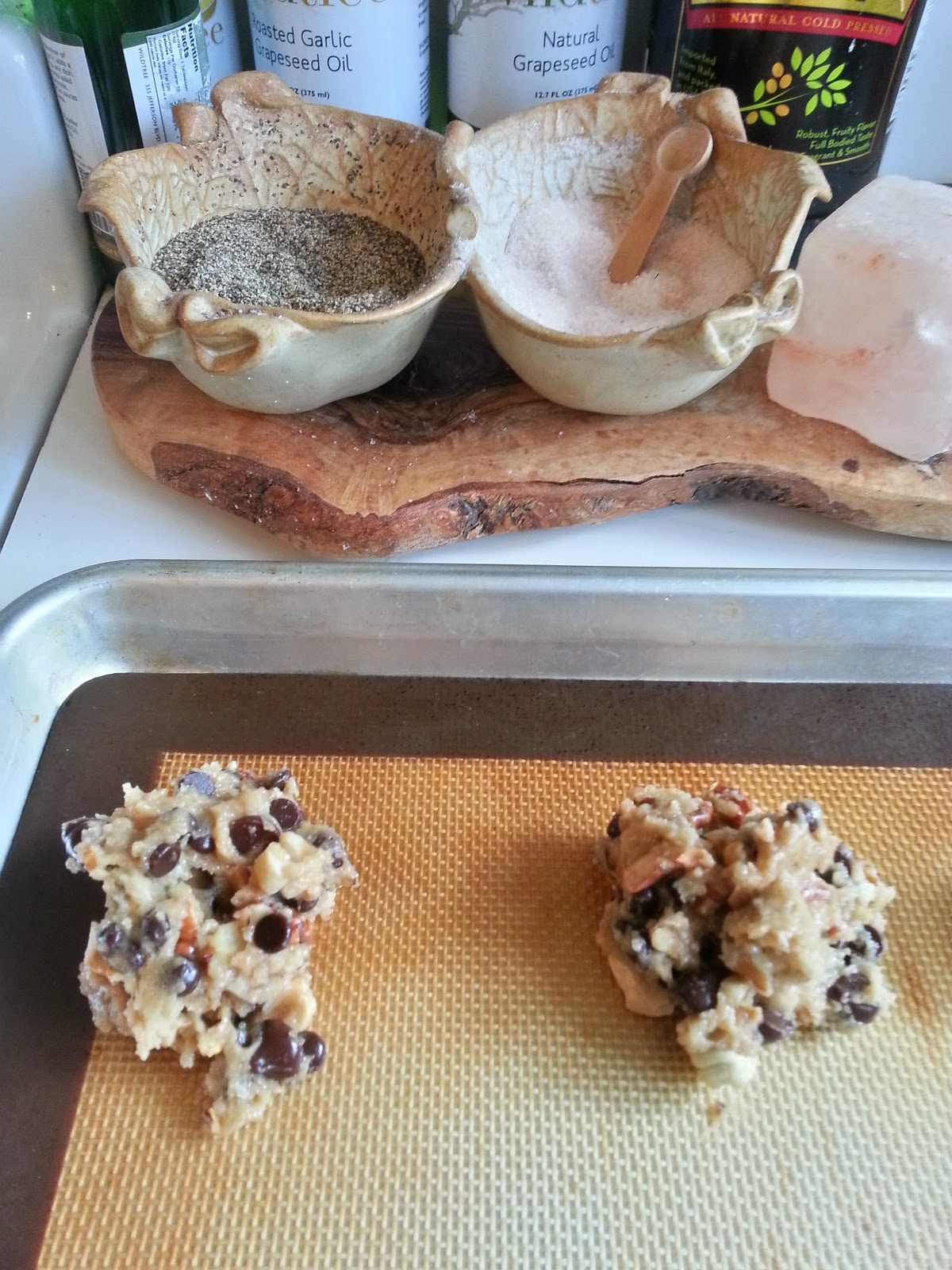 Do not roll your dough, do not press it, do not mush it around. You want it to drop it onto your baking mat or parchment paper and let it remain free and unencumbered.  It just tastes better that way.

I cook mine for 12-14 minutes at 350°F/175°C. At 12 minutes, the cookies are just done. They are doughy and melt in your mouth good. At 14 minutes, they're a bit crunchier and darker.  In either case, though, what you're looking for is that the top of the cookie is no longer wet. If you peak and they're still wet, they're probably not done. You'll have to feel that out to be sure. When they come out, they also appear a bit oily. This is normal. They settle as they cool, and you want to leave them undisturbed while they do so. Once they can be picked up with collapsing on themselves, they're done, and that takes a few minutes. Here's what they look like immediately out of the oven. It's a bit different than after they cool: 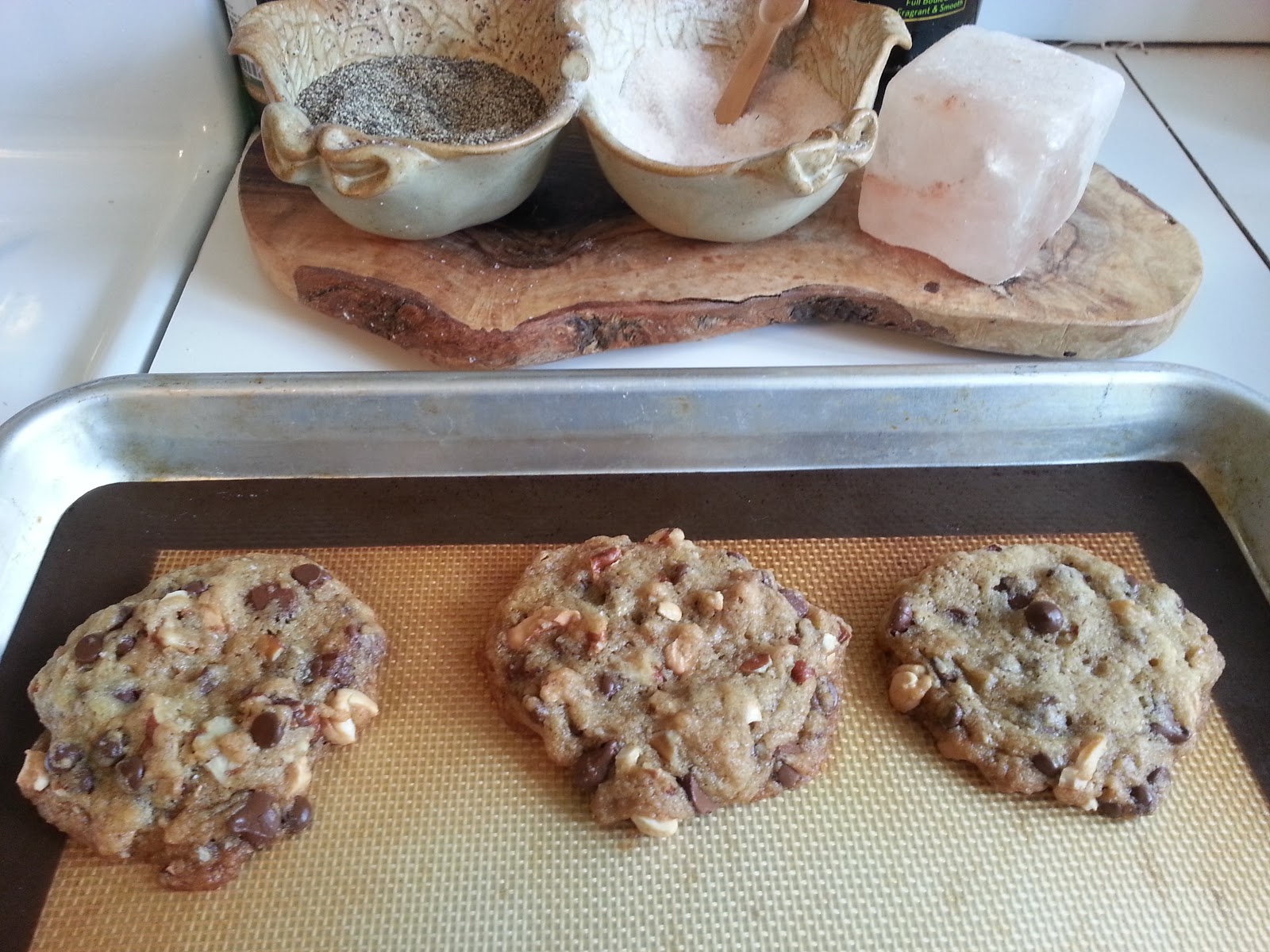 You can use parchment paper or a baking mat. It doesn't really matter. the bottoms might brown a bit more on parchment paper, but you can avoid that by taking them off the cookie sheet as soon as they come off the oven. 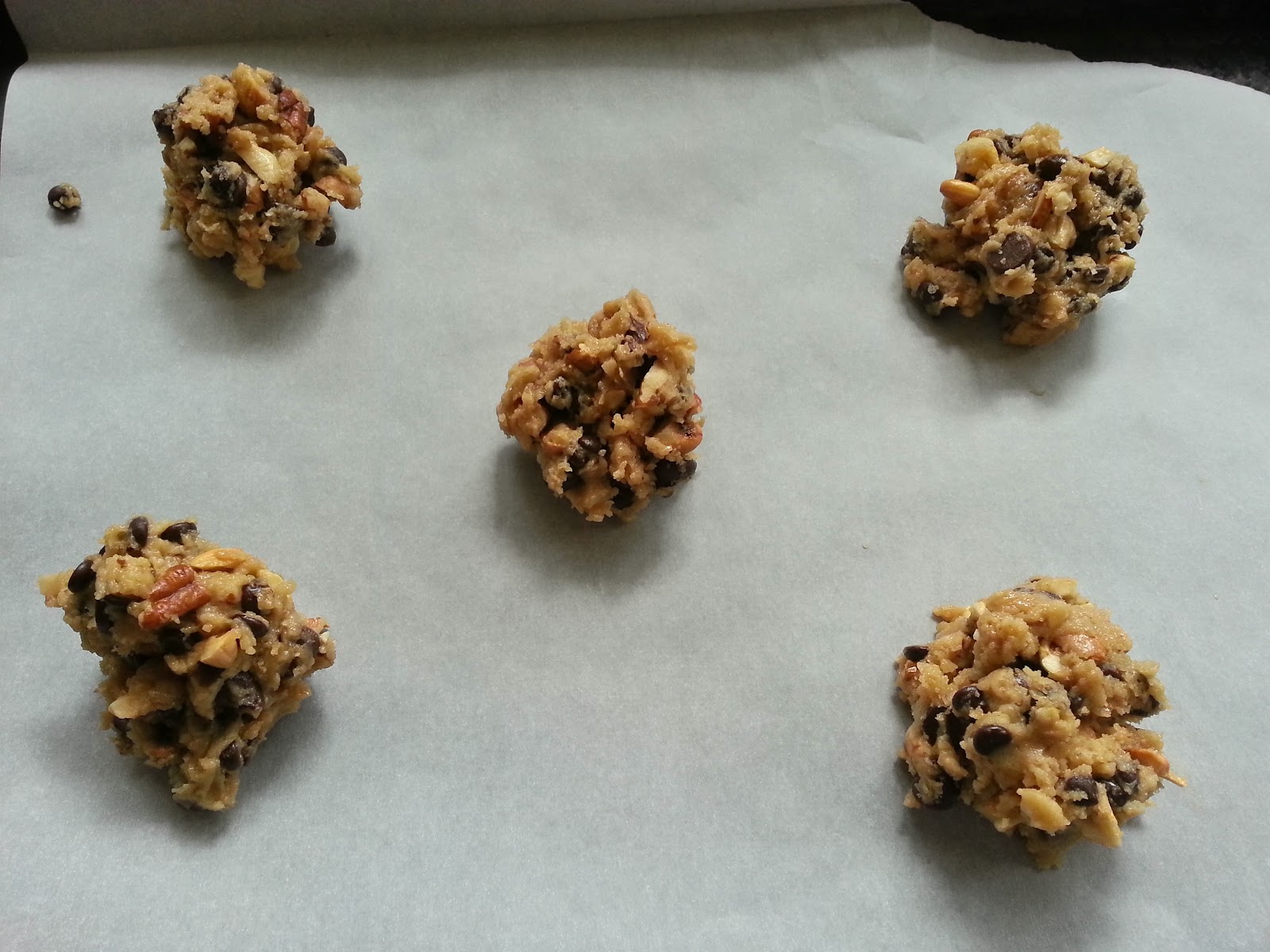 Just slide the whole parchment paper off to the side onto a cooling rack and leave them alone to do their thing. My cookie sheets have ridges on the side, so when I slide them off, the whole cookie is soft and supple and slides up and over and back down that ridge like a piece of cloth would, but it doesn't matter, because it's as they cool that they crisp up and get their final texture. They're pretty malleable before that.  Notice how these look all oily and unattractive right out of the oven? 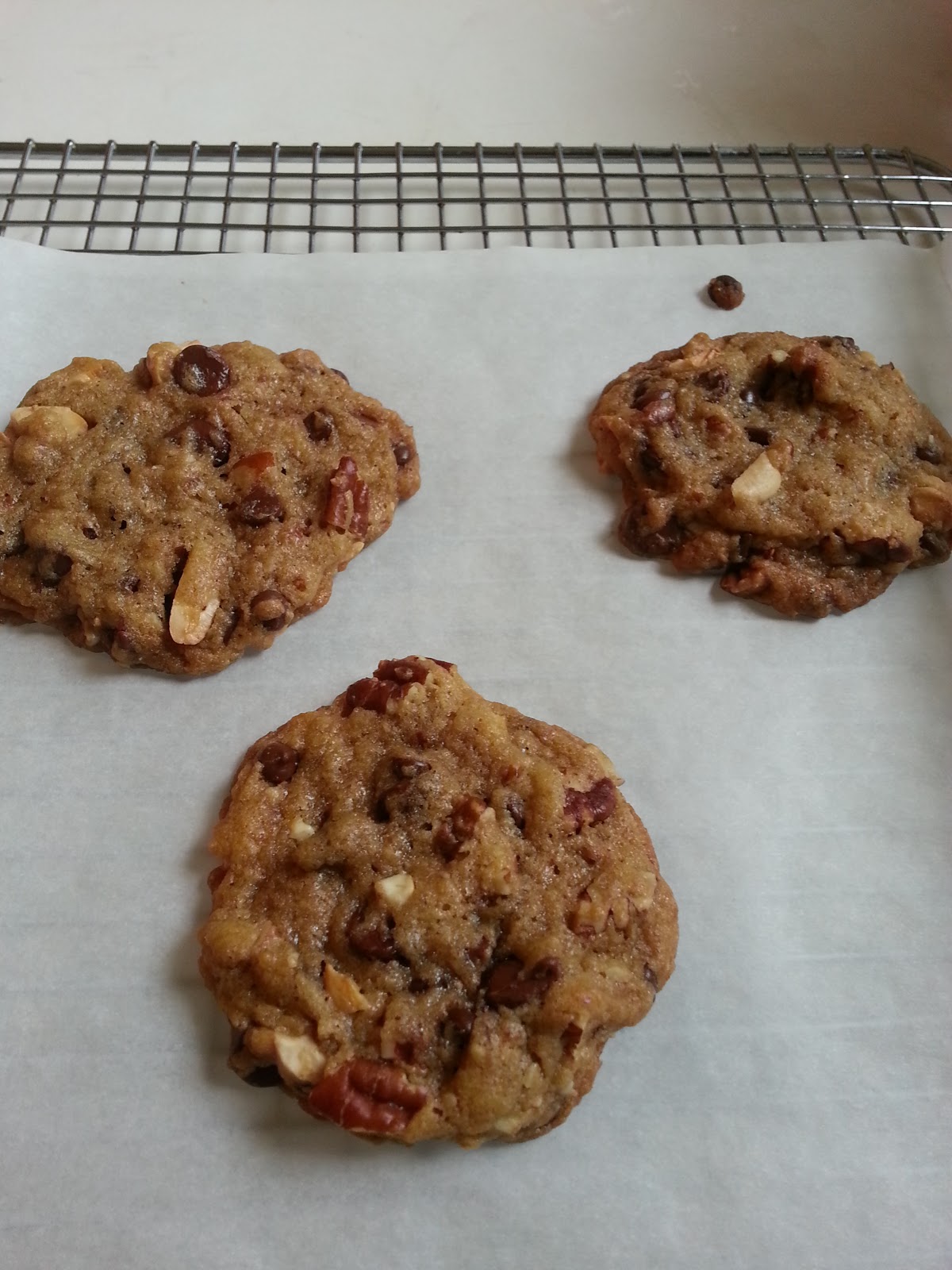 As they cool, that quickly gets absorbed back into the cookie 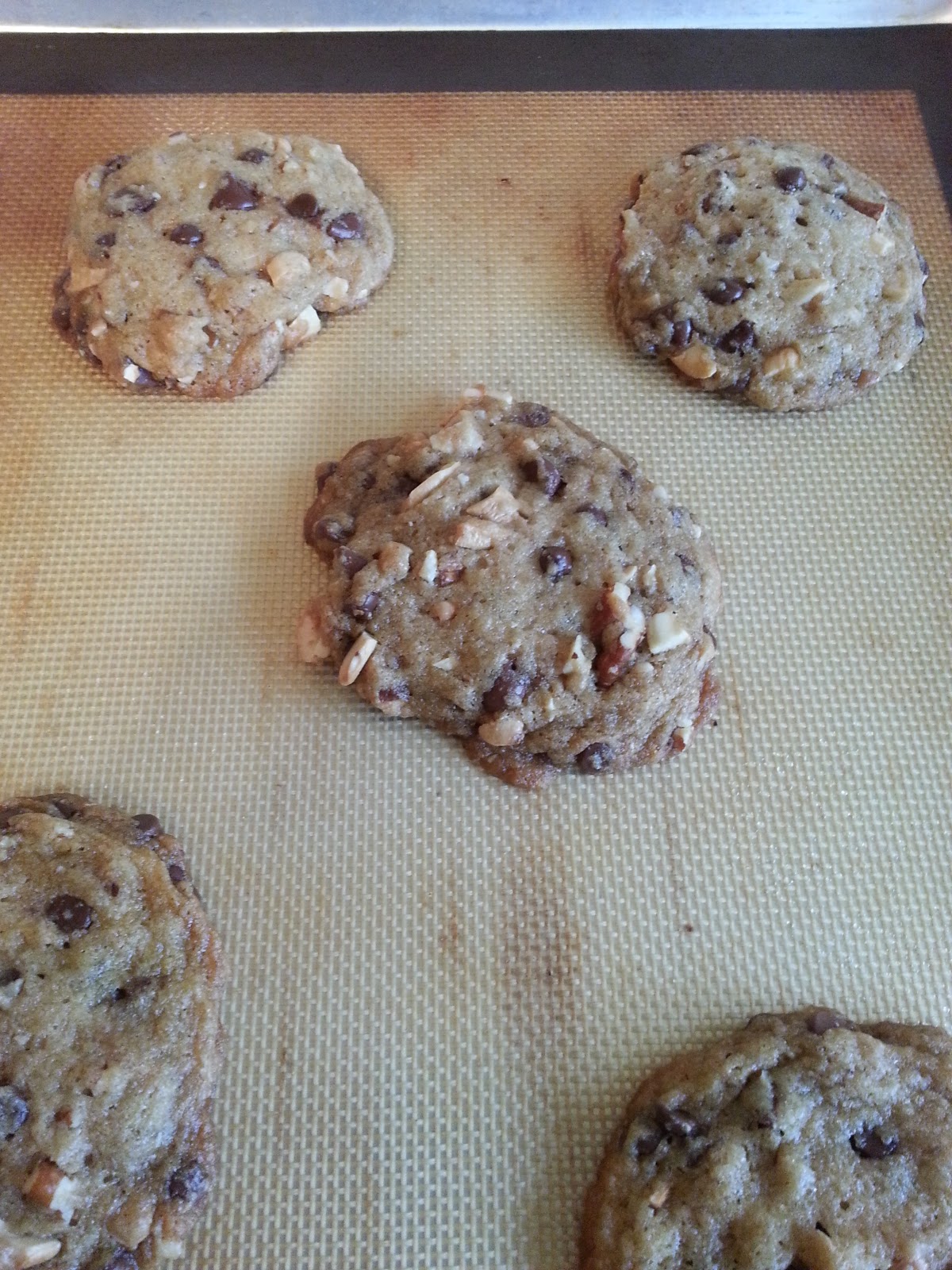 And when they've crisped up enough to pick up without breaking, they end up dry and picture perfect, and simply divine. Using aquafaba as an egg replacer is nothing short of miraculous. I just cannot stop eating these cookies, and now I have no excuse not to make them all the time. Mwhoooahahahha!

Also, if you want to save the batter, it does really well in the fridge over night. You can even freeze balls of the batter and take them out as you need to cook them. When you do this, just put them directly in the preheated oven or toaster oven straight from the freezer. They may need an extra minute or so, but as long as you cook them until they do not appear wet on top any more, they're just as good as fresh.

Here is another photo snapped with my phone. There are no filters, no editing, no re-touching what-so-ever. I just dumped the ones from the previous pictures onto a plate and snapped one in half.

Notice how the tops are no longer oily and they settle slightly into that perfect chocolate cookie shape? You simply can't ask for a better balance of ingredients in a cookie. 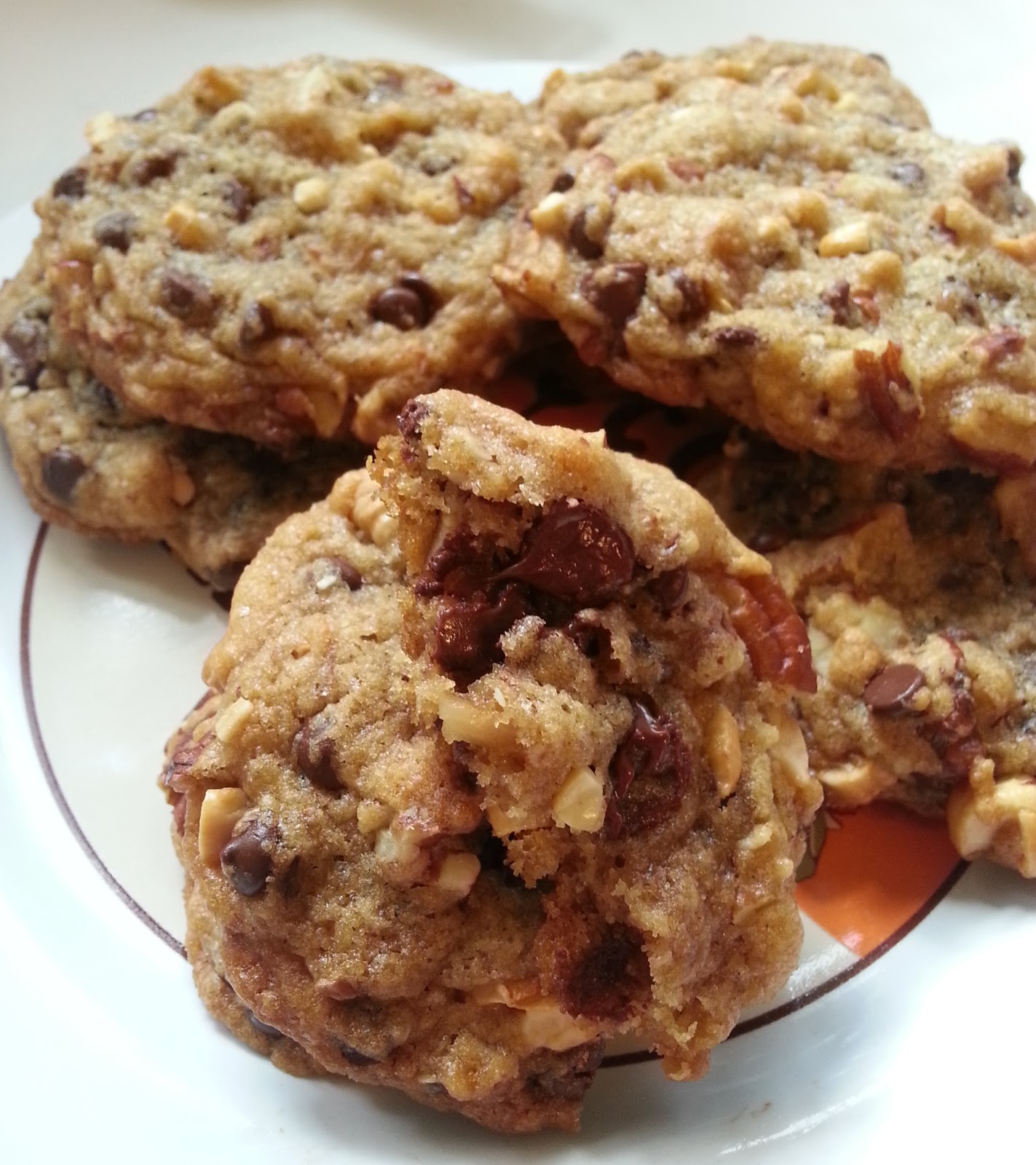