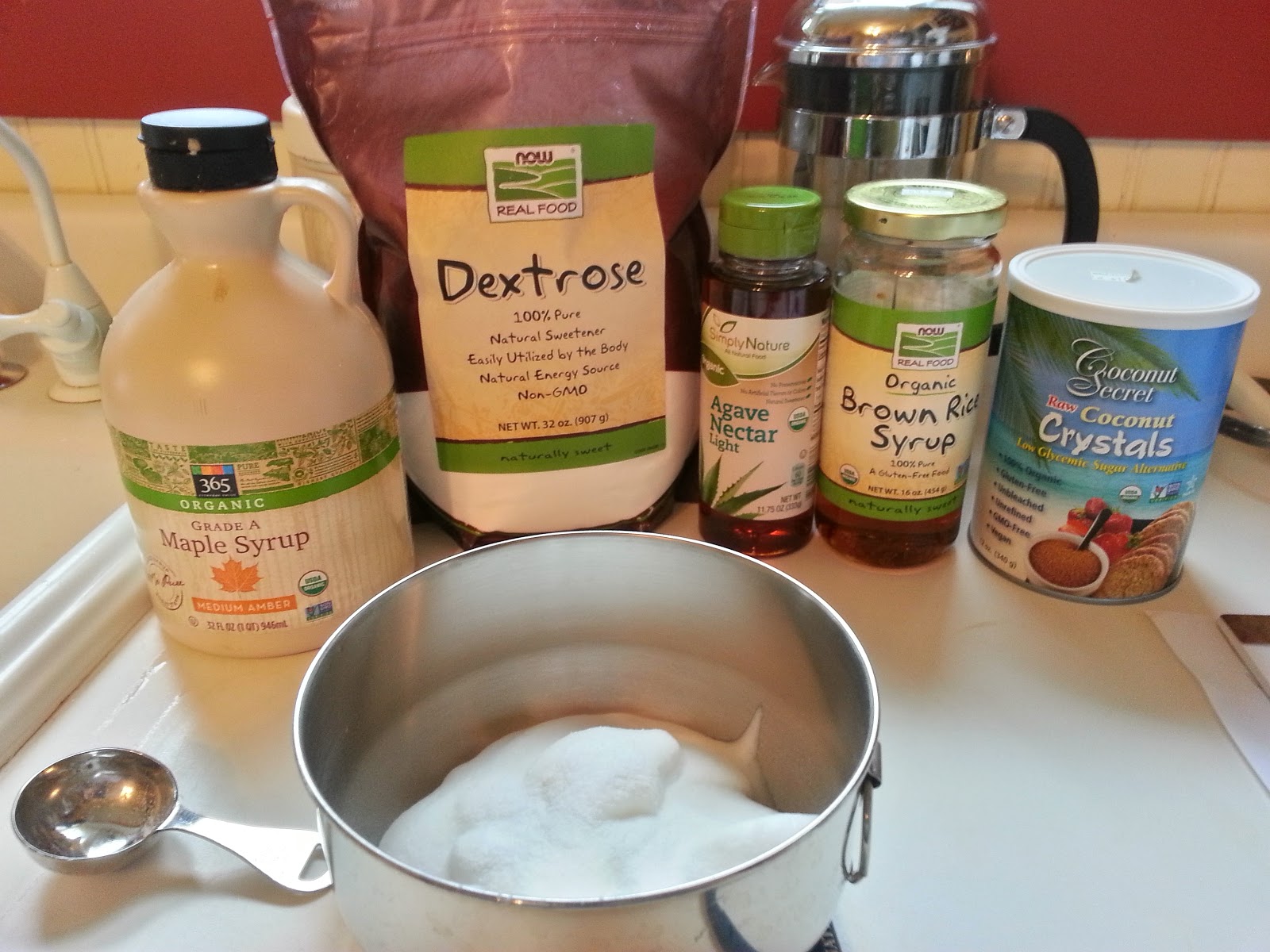 It's been two months now since my initial two ingredient meringue post on the What Fat Vegans Eat facebook page.  In that time, I've probably gone through about 10 pounds of sugar, and eaten a good share of that making meringues out of aquafaba.  Two things have come out of that: a sensitivity to the taste of raw garbanzo beans, and a dislike for the taste of cane sugar.

This weekend was an exploration in other kinds of sweeteners for meringues, marshmallows, nougat, etc. It was back to the foundation for me, and that means starting with raw, whipped liquid from a can of beans and varying the sugar... the FLUFF.


Lately, I have been doing some poort man's A/B testing to try to narrow down what qualities make Kraft products like Cool Whip or Marshmallow Creme taste the way they do.  Those experiments continue, and I will share them with the development community at Vegan Meringues Hits and Misses! as they unfold.

What I realized this weekend, however, was that I was still using my original recipe of aquafaba and cane sugar in all these trials.  In the beginning of the vegan meringue craze I had toyed with artificial sweeteners like erythritol with some success, but the taste was awful, so I've been using cane sugar ever since, and occasionally corn syrup. I never really thought to use anything else except maybe honey, but that's a hotly debated topic in the vegan world, so in the interest of keeping things accessible to as many people as possible, it's not a consideration.

Occasionally people in our vegan aquafaba development group join and ask if they can make meringues without sugar. I usually just respond out of habit now saying that stevia, xylitol, etc don't work, but erythritol works to some degree and they'd be better off just replacing some of the sugar. What I should have realized is that there are other dimensions to the sweeter that people care about.

One such dimension is that of the glycemic index!

If you do a search for the glycemic index of various sweeteners, you'll learn that the scale goes from 0 to 110 or so, where 0 are things like the artificial sweeteners, and 100 is glucose/dextrose. Table sugar, aka granulated cane sugar or sucrose, falls around 65. I just happen to have a bunch of sweeteners in my pantry from marshmallow powder experiments, so I looked through the for a few exemplary ones to play with:

Armed with all that, it was time to make some two ingredient fluff ...

I've heard various things on the vegan meringue group referred to as fluff. Some people call the aquafaba and sugar fluff, some call just the aquafaba fluff, and some refer to fluff as the uncooked Italian meringue made with boiled sugar. They're all fluff, to me.  But what I always loved as a kid was the Kraft marshmallow creme and now that I'm vegan, Ricemellow creme.  In the past few months, I've come to realize that if you want something that tastes like those, you need to go through a few steps:

For now, however, I want to see how far I can get towards those tastes with raw fluff, and by fluff I mean just basic aquafaba from a can and sweeteners. No heat, no gums, just two ingredients and lots of whipping.

Usually I use 8.75g of aquafaba powder and 2/3 cup of water to make a "can" of aquafaba, but I'm currently out due to a recent angel food cake experiment (which I need to write up). So in this case, I went with one from the back of the fridge  ...

This is a Simply Nature brand of organic garbanzo bean: 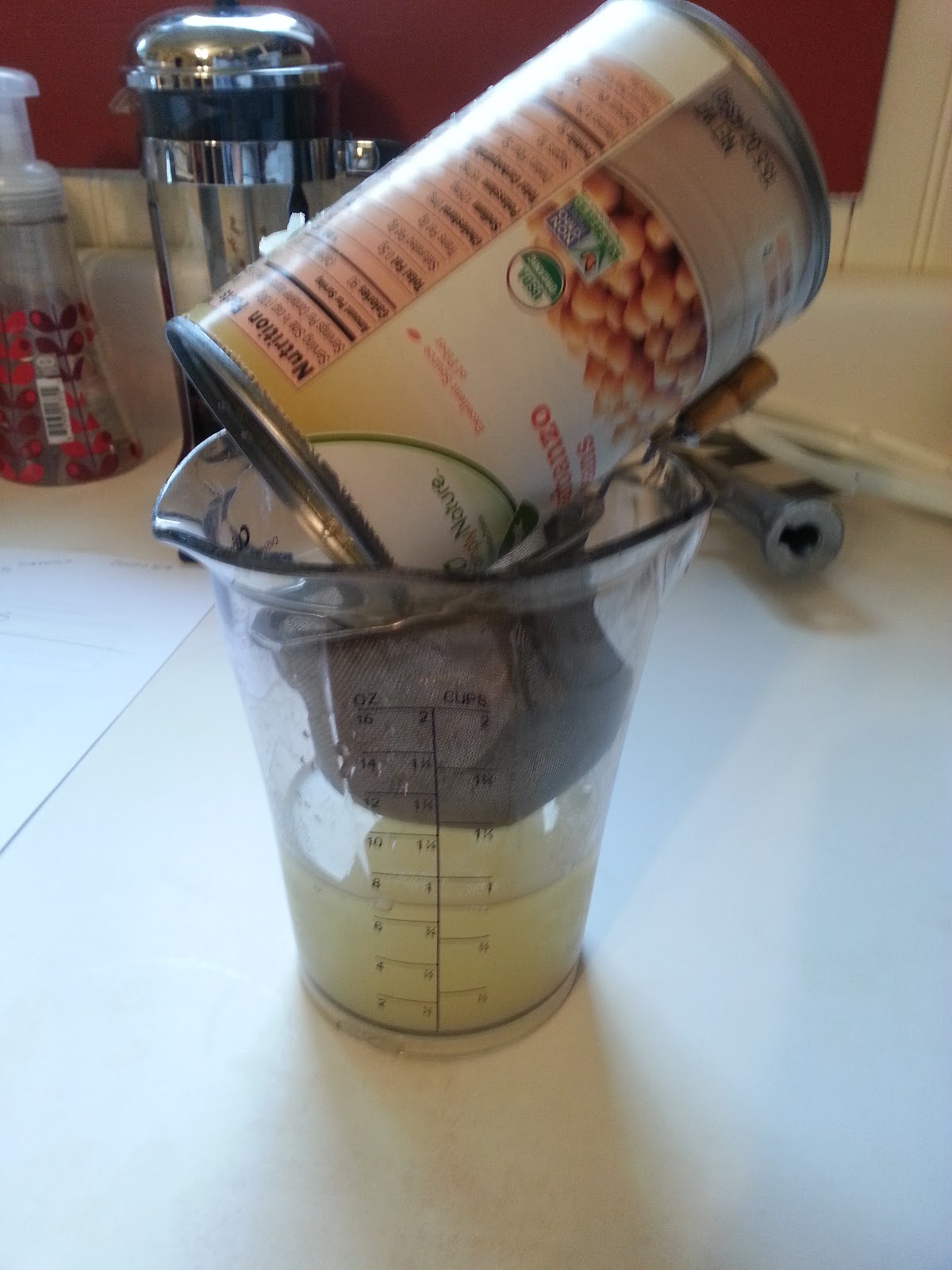 I shook the cane gently back and forth to loosen up the goop at the bottom, then opened it and strained it through a fine tea strainer to get 200mL of liquid.

Whipping it on high in the kitchenaid stand mixer went something like this:
That made about 5 cups of volume... about 40mL of aquafaba per cup. I set that aside and split it into five parts.

I picked maple syrup first, since it seemed like the healthiest and most accessible.  I whipped that in a hand mixer and added a tablespoon of grade A organic maple syrup one tablespoon at a time. Some notes:
All in all, maple syrup seems to be best suited for something like a pie topping, where you don't really care about peaks. It's accessible to everyone, it's better for you than sugar, but it won't hold its shape in meringues as any significant amount. Maybe if you limit to 1-2 Tbsp per 40mL of aquafaba you could get some meringues out of it if you don't care about appearance.  And if you cool it in the fridge, you could probably whip it prior to serving. I bet it will make a great "nice cream," too!

[UPDATE: After a few days in the deep freeze, I took at look at sample "A". The first thing I noticed was that it had separated. There was a small brown layer on the bottom and white on top. The white was a very light texture, like a Cool Whip product without any sliminess, but with a twist. It tasted like caramel. Immediately I thought of popular caramel ice creams I had eaten in the past and involuntarily took another bite. Yum! There was no hint of crystallization in the whites, but the brown on the bottom was crystallized. It was still good, and didn't taste too much like maple syrup. I actually thought this was the brown rice sample. there is no hint of beany taste]

Way at the top of the glycemic scale, and a powder, I was curious how it would work, even though it's way worse for you than cane sugar in terms of glycemic index.

I also put a dollop of the dextrose meringue into the oven to see how it would hold up as a meringue. With 4 Tbsp of powder to the 40mL of aquafaba, that's about 1.25 cups of dextrose to one can (.84 cups) of aquafaba, which is a reasonable concentration. It spread way too much, was sickeningly sweet, and super chewy, unlike its darker coconut crystal cousin in the background: 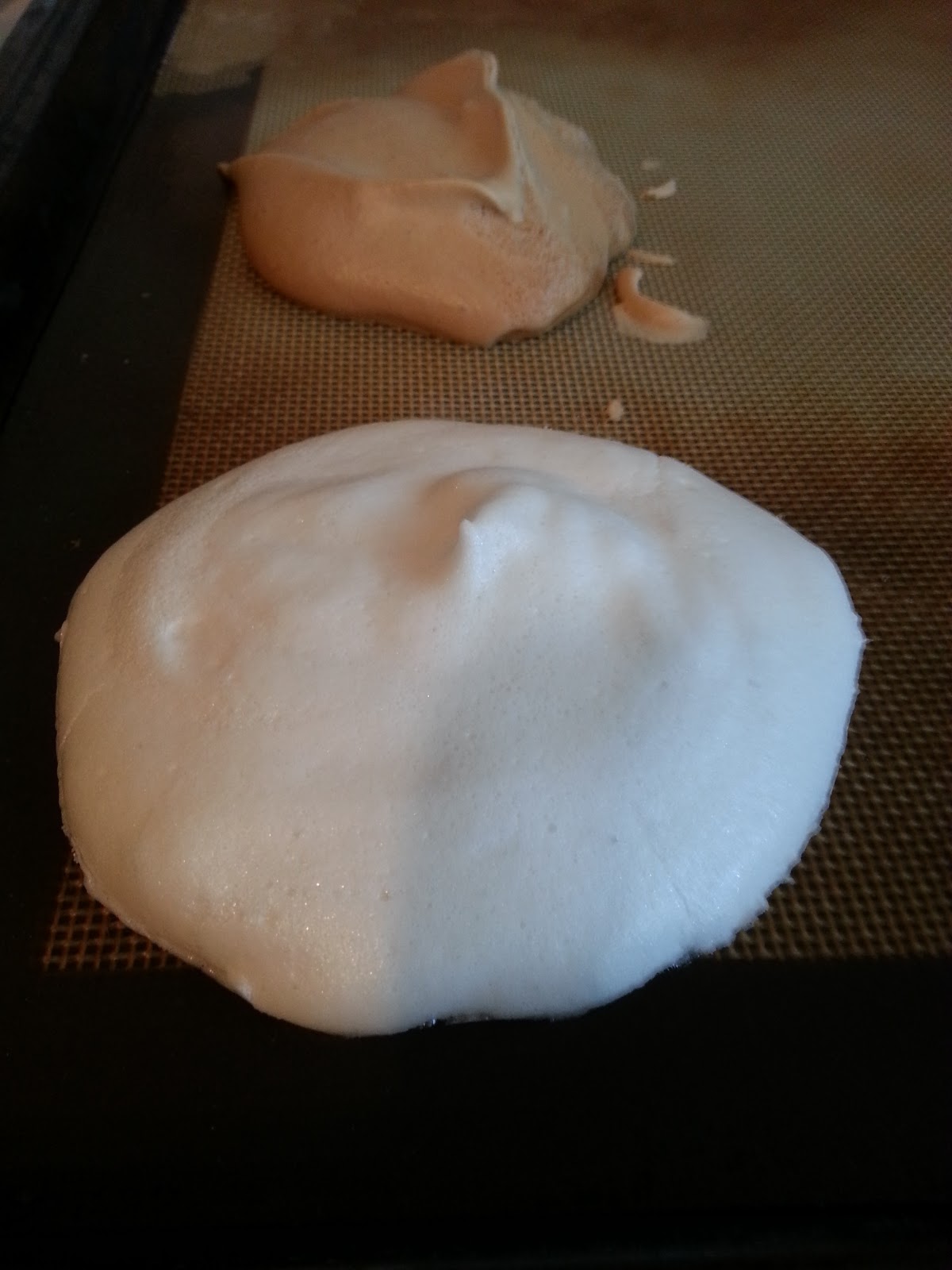 [UPDATE: After a few days in the deep freeze, I popped the lid and dipped my spoon in to try it. Immediately I was struck by its texture. It was like a bowl of dry, packed snow! The mouthfeel was identical. If this came in a small, aqua 3oz package in the freezer section of a store labeled Snow for a half a buck, I'd be snapping them up and sticking them in my freezer. I've never had any product before that capture the texture of snow before. It was bizarre. The only downside was that it was super sweet. Like Smarties®, still, so it could stand to be a bit less sweet.  The kids went absolutely bonkers for it, though. In the winter, we sometimes collect bowls of snow and cover them in sprinkles as a treat. This was like a year-round version of that, only better!]

Coconut crystals are dark, moist crystals, a bit like dark brown sugar, and since they're not wet like syrup, it made a fluff that was able to hold stiff peaks. 35 on the glycemic index, it's ostensibly better for you, but not as accessible as, say, maple syrup. I got mine here.

After baking the meringue at 200°F/93°C, it was light and delicious, and very airy throughout. No hollowness or chewiness. 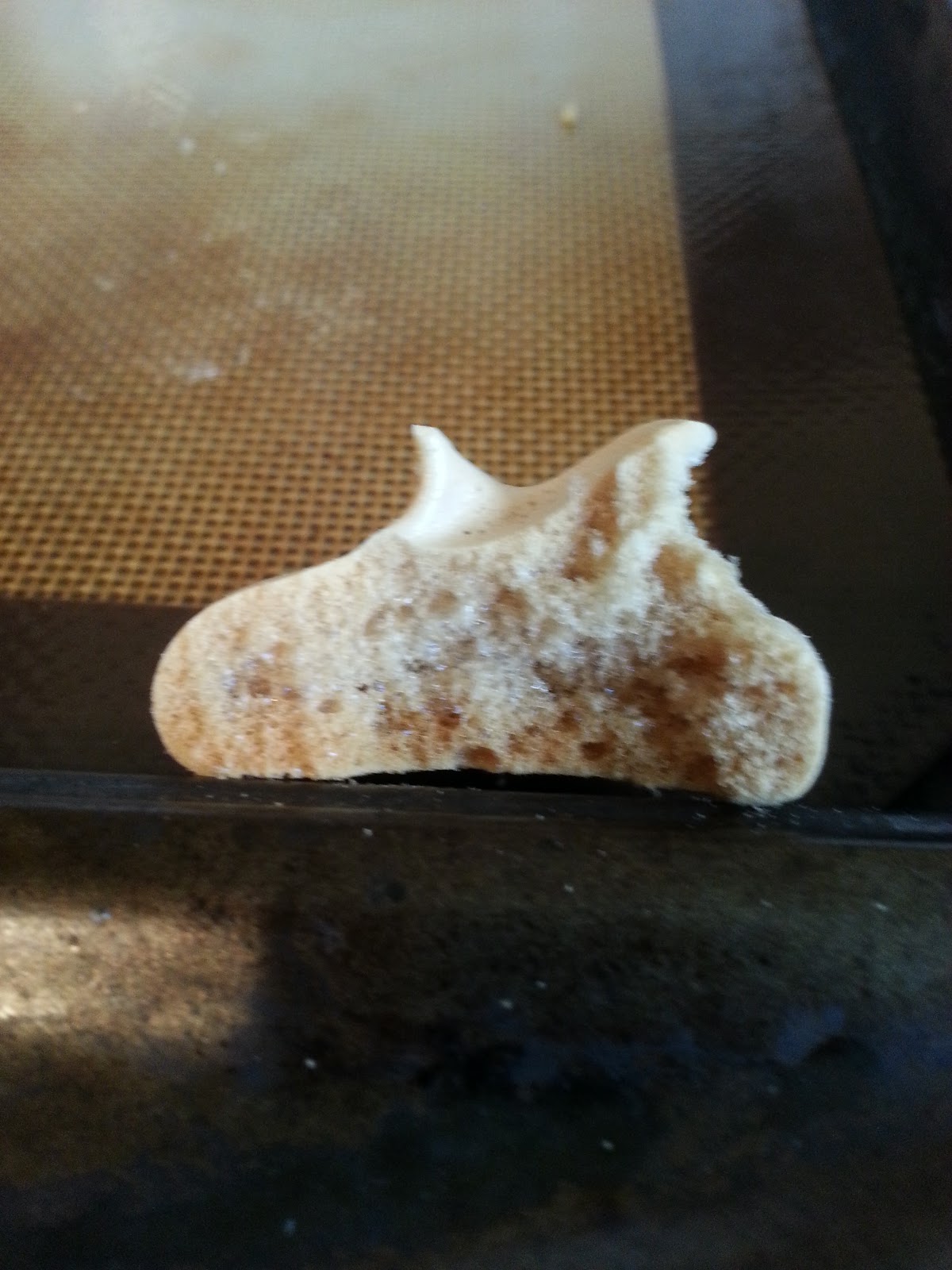 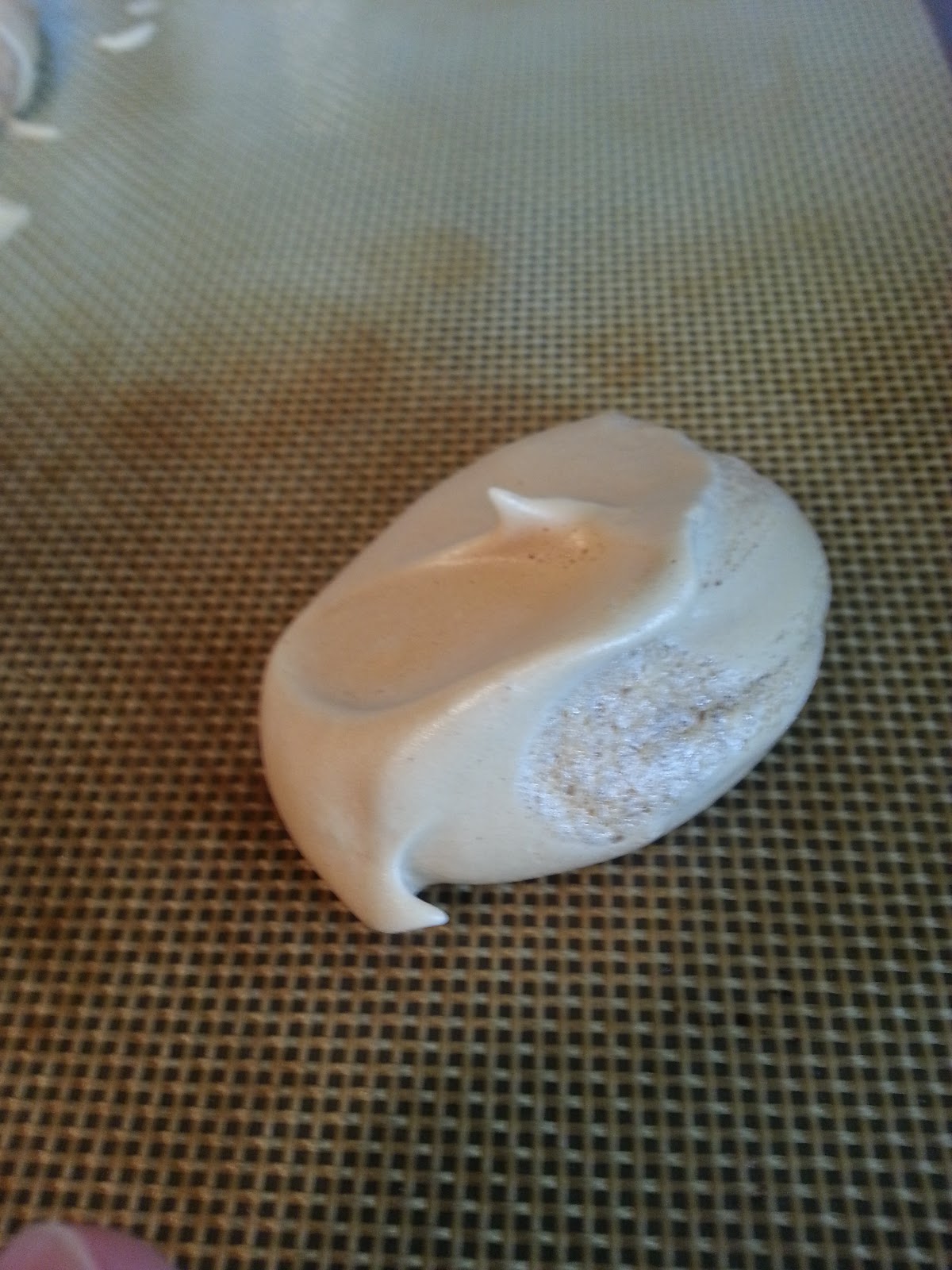 At 3 tablespoons of sugar to 40mL of aquafaba, we're talking about a tablespoon shy of one cup of coconut crystals to 1 "can" of aquafaba. One cup or more might be even better. It's a great meringue in its own right. Super yummy.  It tastes very similar to my thrice baked meringue invention where you take a baked meringue, pulverize it, add water and remake it, thrice over. It's got dark, rich notes in it; it's just missing the smokeyness that you get from re-baking.

[UPDATE -- after a few days in the deep freeze, these were light in texture and fluffy like "A" was. There was no hint of separation, and the foam was light in color, too. The problem was that the taste was very dark... the coconut crystals have a very strong taste to them. As long as you don't mind that taste, however, the texture was super light, cold, airy, and sweet]

This was by far the most interesting one. It's got a low glycemic index, coming in at only 25, and it doesn't have an overpowering taste like the previous three sweeteners do.

There's definitely an interesting sweet spot [npi] around 4Tbsp where it starts to develop a similar taste to when you boil sugar and add it to the aquafaba. Added it to the freezer as "E" to see how it will turn out when cold. It's too runny to stand on its own as a fluff or to make meringues at that point, but the taste is closer than any of the previous ones, so it seems like you could at least substitute some of the sugar in a vegan meringue with brown rice syrup to make a raw fluff that tasted more like the real thing if you didn't want to bother heating your sugar. Amazon has a bunch of brown rice brands.

[UPDATE - after a few days in the deep freeze, this stuff was still not frozen. It was cold, though, which doesn't always happen when freezing aquafaba with sugar. The texture was like a very dense marshmallow fluff. It had a strong syrup taste, but still good, just too sweet. There was no hint of bean at all, and the texture was almost like it had vegetable gums in it, but without the gums! I suspect a 4Tbsp version would have been much better, and promising.]

Okay, so agave has a bad rap, but it also has a super low glycemic index, coming in at 15.  My notes:


That's about it on agave. Not a fan. Didn't freeze it.

Overall, it seems like there are definitely options for reducing the glycemic index of a meringue or fluff made from aquafaba, but to get that real "Fluff" taste, you really do have to resort to heating and/or vanilla. There are so many recipes on the Vegan Meringues Hits and Misses! for Italian or "Internationale" fluffs, you can go there to explore.

The one that tasted the best to me was the first one I posted to that group, but it used a combination of xanthan gum and versawhip. I've made several marshmallow recipes since then and a couple of different cane sugar based fluffs since then, but none of them come close to that recipe in terms of taste. I hate versawhip with a passion though, so it seems like the best choice for something approaching the standard commercial marshmallow cremes would be boiled sugar with brown rice syrup, added to aquafaba with vanilla and xanthan gum.  But then you've essentially recreated Ricemallow made with aquafaba.